Shotokan Karate is one of the original forms of Karate developed in secret on the Japanese island of Okinawa, and disclosed by Master Gichin Funakoshi in 1921. In 1922 he moved to mainland Japan and promoted his art and philosophy of Karate-do (the way of the empty hand) to universities and through public demonstrations there.

Master Funakoshi was elected honorary Head of the Japan Karate Association (JKA) in 1949. Many of his students continued to teach Karate after his death in 1957, but various disagreements regarding the appropriateness of competitive Karate to the philosophy behind the art led to a split into different styles (Shotokai, Gojo-ryu, Wado-ryu, Kyokushin-kai, Shugo-kai, Shito-ryu and others) though they are all influenced by Funakoshi. The word ‘Shotokan’, meaning ‘billowing pine trees’ (shoto) and ‘hall’ (kan) was the name of Master Funakoshi’s Central Dojo: the first independent Karate dojo in the world (1939) and not originally intended as the name of the style. Funakoshi simply called his martial art ‘Karate’ (kara, ‘empty’ and te, ‘hand’) as practitioners (karateka) are unarmed. Shotokan Karate is regarded as a strong, traditional and influential style.

In 1965 the JKA sent its most skilful and renowned instructors, Senseis Keinosuke Enoeda, Hirokazu Kanazawa, Hiroshi Shirai and Taiji Kase to Europe to promote Shotokan Karate. In 1966, Sensei Kanazawa was invited to Britain and the Karate Union of Great Britain (KUGB) was formed with Kanazawa as Chief Instructor.

Two years later, Sensei Kanazawa moved to Germany and Sensei Enoeda replaced him as Chief Instructor of the KUGB (then still part of the JKA) until he died in 2003. 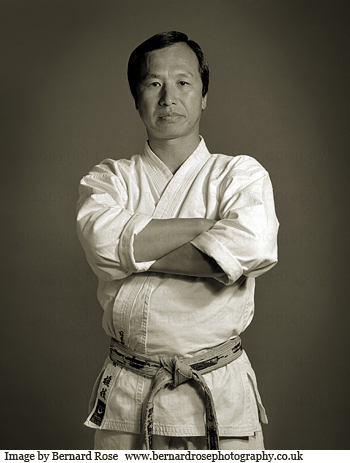 (9th Dan), current Chief Instructor of the KUGB, trained under Sensei Enoeda and, in 1966, became the first person in the UK to earn a black belt in Shotokan Karate. He is Britain's most senior Karate practitioner, coaching the international squad and adjudicating gradings and competitions throughout the country alongside other Senior Instructors such as Bob Poynton, Terry O’Neill, Billy Higgins, Bob Rhodes, Frank Brennan and others.

Tsutahashi Karate Club's Senseis Neil Rowley and Dave Hore have both trained under Sensei Enoeda, and therefore have invaluable lineage (only 4th generation from the initial founder of modern Shotokan Karate, Master Funakoshi).

The KUGB is Britain’s largest and longest-established Shotokan Karate Association with over 300 clubs. It holds true to traditional values and philosophy, maintaining high standards for the benefit of karateka today and into the future.

Ivybridge's Tsutahashi Karate Club is proud to be part of the KUGB and its family of Karate clubs, teaching the martial art in the depth and quality which was initially intended by Master Funakoshi, maintaining the strong and effective martial art of Shotokan Karate in modern times.